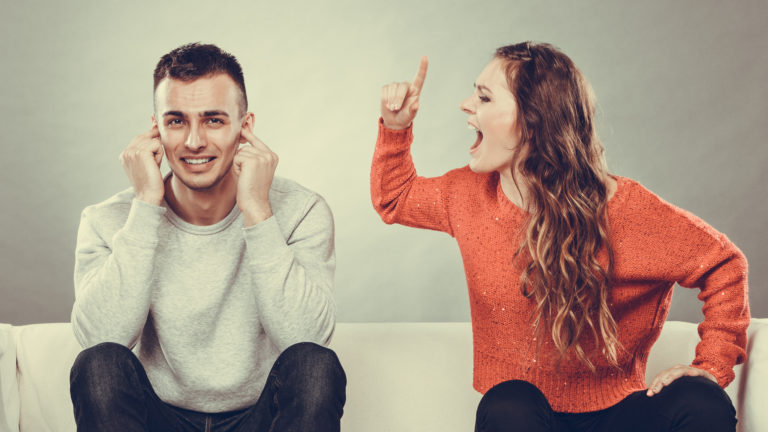 Couples frequently come to therapy complaining of communication problems. Conflicts don’t get resolved. Intimacy has left the relationship. They lead parallel lives. The focus is on the kids, or their work or friends, but not each other.

During the first session of couples counseling, I take a history of the relationship and ask them to talk about a current problem for ten minutes. Invariably one partner will dominate the discussion. In subsequent sessions, I see the same thing.

For instance, Jody and Tom came to couples therapy because Jody feels Tom never listens to her. She is upset because he tunes her out and doesn’t open up about his thoughts and feelings. Observing Jody and Tom for a few minutes gives an important clue to why they have come to this place in their relationship: Jody talks a lot. In fact, she talks in paragraphs—even pages. She is animated, eager to express herself. Tom sinks into the sofa, shoulders hunched in resignation as Jody takes over the conversation. There is no doubt that she has important points to make and makes them well, but Tom doesn’t get a chance to speak. When I prompt Jody to let Tom speak, he gets a couple of sentences out, and then Jody interrupts, speaking for him.

Who Talks More in Your Relationship?

I have seen this scenario over and over again in my work with couples. Do women talk more than men? This is a controversial issue and many factors come into play. American neuropsychiatrist Louann Brizendine reported that the average man speaks about 7,000 words a day, while the average woman clocks in at 20,000. My observations would bear that out, although admittedly, I see a skewed sample. However, I don’t think it is a genetic or neurological issue so much as a relationship one.

The very thing that Jody wants from Tom is closeness, but she doesn’t give him a chance to talk. The pattern gets further entrenched as Tom’s unexpressed resentment grows and he retreats into his own thoughts, which often see Jody in a negative light. This perpetuates the cycle, with Jody seeing him in turn as distant and aloof. Furthering the pattern is a subtle dynamic at play: as Jody sees Tom’s discomfort and reluctance, she talks for him—letting him off the hook, so to speak.

They each have a role to play in this dynamic but are not aware of their roles.
Using a variety of interventions, I have Jody and Tom change the way they talk and listen. I frequently invoke what I call the “three-sentence rule” for the partner who dominates the conversation. When they come to see the pattern, this rule is met with chuckles and relief. Jody doesn’t really want to do all the talking, and Tom wants a chance to be listened to.

Reciprocity is Essential to Good Communication

Lately, because of the popularity of Twitter, I suggest a rule of 140 characters or less. Tech-savvy couples know this means to limit talk to the most pertinent points, usually in three sentences. Pause. Give your partner a chance to respond. Resume. Reciprocity is essential to good communication. As Tom expresses himself more, Jody can relax and feel less need to control the conversation. In this way, couples learn more about each other, bringing closeness and, in time, greater intimacy. Couples are often surprised to see their patterns of communication are changeable.

So if you catch yourself speaking in paragraphs abounding with run-on sentences, stop and let your partner have a chance to speak. You may be surprised by what you learn from each other.