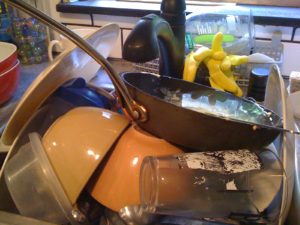 Dirty Dishes in the Sink, Smelly Socks on the Floor

Sometimes the things that drive us most crazy in a marriage are the most mundane and trivial: dishes piled up in the sink, socks dropped on the floor. We may complain, criticize, and yell, but the end effect is that the dishes don’t get done, the socks eventually migrate back to the floor, and we end up feeling even more distanced and angry toward our partner. If complaining doesn’t work, neither does ignoring what drives us crazy. Over time, a couple can see their relationship with what John Gottman describes as “negative perspective.” We get so focused on the negative that we become unable to recognize even neutral or positive actions from our partners, snowballing our unhappiness.

As a couples therapist for many years, I’ve seen the situations that bring clients to treatment range from catastrophic events like affairs and severe illness to the mundane, like smelly socks and cluttered countertops. A sampling of conflicts:

Without help, such situations can drive a wedge between couples that can go on for years. Research has shown that couples wait an average of six years after becoming aware of problems in their relationship to seek counseling. That’s a lot of water under the bridge, and a lot of built-up hurt, anger, and distance. By the time couples do come to counseling, their relationship has usually crumbled, with deeply entrenched negative thoughts about the marriage. Fighting about the dishes is no longer about the dishes–it’s about a partner’s poor character. “She is so self-centered”; “He is so lazy.”

How does a couples therapist help when each partner blames the other and feels like the victim? Taking sides is not an option: the partner who feels ganged up on will bolt from therapy, and nothing will change. There may occasionally arise a need to confront one partner about issues that are causing harm, such as abuse, but in my practice, that is rarely the case. That said, helping untangle years of accumulated misunderstandings is not an instant fix. Everyone becomes invested in seeing things our own way, so opening our eyes to a partner’s viewpoint is something that takes time and skill. The good news is that these skills can be taught by a therapist who helps change the dialogue.

Softened Start-up Rather than Harsh Start-up

One of the most useful and yet seemingly simple skills to teach is to complain without blame and to begin a conflict discussion with a softened start-up.

How does this look? Well, take the older couple who fights about the blankets. With a harsh start-up, the freezing wife might say “You have no idea how selfish you are! You take all the covers every single night, leaving me with just the sheet—and a thin sliver of a sheet at that!” Her husband becomes defensive: “Well, what a complainer. Just tug on the blankets, and quit blaming me! I’m asleep, I can’t help it.”

It may feel momentarily satisfying, but coming out swinging engenders a harsh reply and an unhelpful one at that. A seemingly small squabble becomes gridlocked. A softened alternative might go like this: “I realize you’re asleep and unaware of my getting cold at night when I have no blankets. It probably happens as you roll over several times during the night, leaving me uncovered. When my sleep is disturbed, I get grouchy the next day, and unfairly blame you for something you’re unaware is happening. I wonder if we can come up with a solution?”

Of course,  her partner might try to laugh it off with  “Why don’t you just sleep in the guest room?”  But, soothed by a soft start-up, he could reply sincerely, without defensiveness: “I know this has been a problem for you for awhile, and I’m sorry. I don’t want you to be uncomfortable and cold at night. Maybe we can devise a way to fix this together. Let’s go to Target and see if there are blanket fasteners or something, and if not, let’s buy a fluffy down comforter and duvet.”

It would be misleading to suggest that this conversation can happen during the first few sessions. To change the way you talk about the blankets, it’s important to realize that the blankets aren’t really the problem. A skilled couples therapist will further the discussion so that each partner feels heard and understood. By uncovering what’s underneath the blankets, so to speak, the couple can see what’s really been covered over.

For the wife in my example, blankets were just one of many ways she felt her partner had been selfish and uncaring. When we discussed some of the feelings that surrounded the blanket-stealing, she was able to see things in a new light. She took ownership for communicating this and her other needs, and responsibility for doing it in a better, less judgmental way. As for her husband, he was able to see that he had in fact been acting with self-interest and ignoring his wife’s needs in many situations. But—and this is equally important—they were also better able to see each other’s good attributes once negative thinking wasn’t squeezing out relationship-enhancing thoughts.

When the concept of a softened startup is introduced in therapy, many partners will exclaim, “But that’s not the way I talk, it isn’t me!” or “Won’t I need a frontal lobotomy to talk this way?”

I chuckle, saying, “No, nothing that drastic.” It takes practice, but eventually, this way of bringing up conflict becomes second nature and feels good. A partner who joins in with a positive response helps to sustain and reinforce this healthier way of handling conflict.

What I love about doing this work with couples is the ripple effect. Not only does the couple change the way they talk to each other, but they model this better communication for their families and children. It’s important to remember that kids pick up both the good and bad things we do in front of them.

The first workshop I took with Dr. John Gottman was in 2000. I began practicing this softened startup with my husband before trying it with couples. We had a CD with practice prompts, and listened to it on a long car ride, with our kids in the back seat. Eventually, our twin daughters began answering the prompts with the softened alternative. We made it a game—yet it became a powerful tool for dealing with conflict. When the girls left home for college, they noticed that most of their dorm-mates were not able to handle conflict so well. The techniques work beyond the family setting.

You don’t have to be a psychologist (or have psychologist parents) to practice these techniques yourself. Take the dirty-dishes example—a frequent conflict for roommates as well as couples. You come home from work and see the dishes stacked high in the sink, overflowing onto the countertops. You think your stay-at-home partner should have done them. A harsh startup would be, ” I can’t believe you still haven’t done those dishes! You’re such a lazy slob.”  To that startup, a defensive comeback would be,  “Well, look at you! You’re not doing them either. So you devalue what I do all day long just because you work outside the home? I work too! You’re so full of yourself!”

You can imagine how the rest of that conversation goes—but it doesn’t have to. Practice coming up with a softened startup for this situation from what you’ve learned so far—try it out!

I’ll give you one way to do this, but it’s not brain surgery; you’ll find many ways to phrase a soft startup in your own words:

“You know I tend to be a neat freak. When the kitchen counters and sink are dirty, I feel uncomfortable. I know you work hard and having clean counters isn’t as important for you, but I wonder if we can together find a way to stay on top of it, as a team?”

The key to all this is to know yourself, take responsibility for your feelings and reactions, and speak about your needs and feelings without leveling a global character assault on your partner.

Now, imagine one of your ongoing conflicts, and try out in your mind a way to communicate using a softened alternative. It’s a surprisingly powerful technique.
—Susan J. O’Grady, Ph.D.