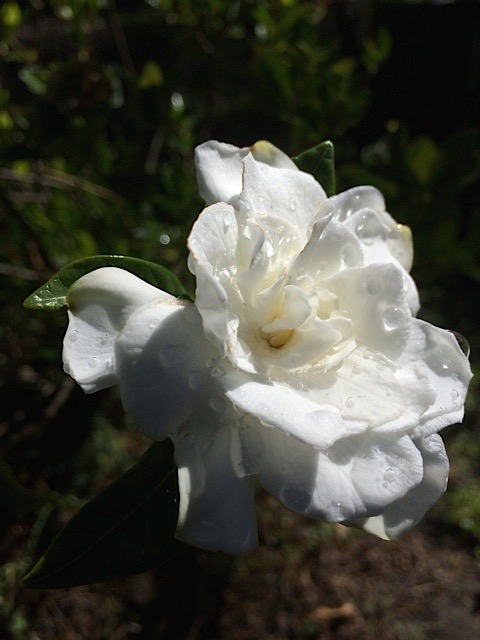 “Yesterday all day a small gardenia was a great consolation.”

A Year with Thomas Merton: Daily Meditations from His Journals

Some days are harder than others. It’s tempting to find something or someone to blame, even if it’s just the wrong side of the bed. Yesterday, I woke up grumpy, but instead of fault-finding, I announced to my family that I was grumpy and not to take anything that happens between us too personally.

My bad mood persisted through breakfast. In fact, I kind of enjoyed feeling grumpy. Especially because there was no apparent reason and I didn’t care to find one. I felt defiant.

I took my hike as I usually do, on this sunny morning. I begrudgingly admitted it was a stunning day. Yet my mood persisted—and became worse as a large group of hikers, some meet-up group or club, began to pass me on the narrow trail. As I walked in the opposite direction up the hill while they clomped down, one by one, they each said good morning, smiling as if the day was something really special. In my sour mood, I thought, ”How many more are there? Don’t they realize that, as one person going against the tide of walkers, I would already have been greeted numerous times? And how many more good mornings and fake smiles do I have to return?”

Many, many more, it turned out, because the group numbered more than 80. And every single person smiled at me and said “Good morning,” or a variant of it. By about the 40th person, something happened without any volition on my part: I began to smile back with genuine happiness. At first, it was in amusement at my grumpy predicament of sharing a trail with 80 very happy hikers, but as the group moved past me, I felt a stirring of good will toward these cheerful strangers, who had unknowingly softened my mood.

Sometimes moods are like that: inexplicable and unpredictable. As a psychotherapist, I help people articulate their feelings. More expansive and more integrated awareness of emotions, achieved through therapy and mindfulness practice, helps people respond more healthily and flexibly in the moment and day by day. By doing so, we can change the quality of our lives.

It can feel as though we’re overpowered by emotions. We can become so absorbed in them that we become identified with what we feel and lose the ability to witness them. A simple misunderstanding with a friend can become an all-consuming and unbearable wound. In such cases, we risk getting stuck in a contracted state that can lead to depression or avoidance behaviors such as overeating, drinking, shopping, or sleeping, which provide a temporary illusion of feeling good. But as we know, those actions backfire, leading to more guilt and less overall effectiveness.

Noting and naming emotions, in contrast, gives us a path past denial or avoidance into acceptance, letting go, and even gratitude.

Sometimes our moods are not just difficult, but serious mood disorders, such as major depression. If feelings of sadness last longer than two weeks, and interfere with daily activities, it is important to get help from a psychotherapist to determine if psychotherapy and medication would benefit. Mindfulness-based cognitive therapy is often a good treatment for depression.

The solution is not to ignore our difficult moods, but to acknowledge them as they arise. In some situations we will be able to trace what we feel to a particular event that we can bring insight to. For other moods, like my waking up grumpy for no apparent reason, we accept them and watch what happens next, much as we do with the weather. Eighty happy hikers eventually made me smile and my bad mood passed as they passed by. That was essentially effortless, but it is often quite effortful to cope with hard emotions.

When we cultivate a disposition that witnesses and accepts passing experiences, we become more stable. In mindfulness meditation or contemplative prayer, we accept thoughts and feelings without judgment and with open and spacious awareness. Emotions arise and pass without interference. I acknowledged my grumpiness and warned my family not to mind me. In doing so, I took responsibility rather than looking for someone or something to blame. This allowed me not only to be open to my bad mood, but also to become open to the good mood that emerged later on.

Sometimes, of course, bad moods can arise for good reasons, not just something that inexplicably overtakes us. In his journal, Thomas Merton describes waking up with heart palpitations and shortness of breath, surely cause for concern. But instead of dwelling on his fear, he starts his page by recognizing the small gardenia as a consolation. He describes walking out into the woods and gazing at the tall straight oaks, closing his journal entry for that day with the lines:

That is more than acceptance; it’s real gratitude. It starts with accepting all our moods, the grumpy and the grateful. Without that, we can only approximate gratitude in a kind of pretending. With my softened mood, I continued on my way, grateful to the hikers, and happy to be spending my morning in the hills.