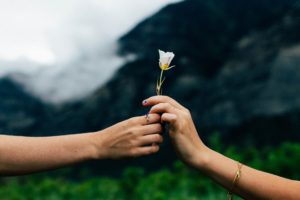 It’s impossible to get through life emotionally unscathed. We’ve all been hurt at some time or another, and not just by enemies; those close to us, like a teacher, coach, parent, friend, or partner, can also inflict pain. Emotional hurts range from those that don’t affect us deeply or for long, like annoyances, slights, and disappointments, or deeper damage such as disloyalty, betrayal, or brutality.

Such wounds can leave lasting feelings of anger and bitterness, but if we stay stuck in these feelings, we may be the ones who pay most dearly. If we become wrapped up in the wrongs we’ve suffered, anger and bitterness can prevent enjoying what’s good in the present. This often leads to feelings of depression, anxiety, and meaninglessness in life.

The answer to stuckness is forgiveness, but there are obstacles, including the depth of injury and who hurt us. When there is a serious loss, a period of grieving must precede the decision to let go of resentment and thoughts of revenge. It’s also important to understand that forgiveness doesn’t mean denying, minimizing, or justifying the wrong done to you. For example, you might say “I forgive my father for slapping me when I was a kid, because he was very upset and I wasn’t listening, plus he didn’t break the skin.” This excuses the father’s actions, so how could forgiveness be phrased?

Instead, the you might acknowledge the father’s slap as hurtful and humiliating, but continue by saying “I forgive him, because I don’t want to be caged by my anger anymore, and I deserve emotional balance.” The act that hurt or offended doesn’t go away, but forgiveness can lessen its grip on you and help you focus on other, more positive parts of your life, bringing you peace.

Forgiveness can even lead to feelings of understanding, empathy, and compassion for the one who hurt you. Again, this isn’t about papering over real injuries, but because when we let go of resentment toward others, we can begin to heal our relationship with the past and clear more space in life to flourish.

Forgiveness is a process that includes several steps and takes place over months, even years, and begins with the conscious choice to change. After being badly hurt, it’s natural to have fantasies of revenge. We want to hurt back! But in choosing forgiveness, the desire for revenge ultimately subsides. The passive passage of time also helps blunt pain, but forgiveness is an active process that involves insight, effort, and personal struggle—and through it, pain is transformed rather than blunted.

Some hurts go deeper than others. When someone you love has betrayed you in a fundamental way, for example by having a long-term affair, the collateral damage can last a long time. Trust is slow to come back, and no one is expected to forget, excuse, or pardon immediately.

Some people feel it’s an act of weakness to forgive, but in fact, it requires a lot of strength. All authentic transformation involves effort and turning toward the difficult rather than away from what is painful. Going through the motions of forgiveness by simply saying ”I forgive you” can leave residues of resentment and anger. Deeper work is required.

And the payoff? Letting go of grudges and bitterness can make way for happiness, health, and peace. Forgiveness can lead to greater emotional well-being and improved physical health—less anxiety, stress, and hostility; lower blood pressure; fewer symptoms of depression; improved heart health; and higher self-esteem, to name some of the research findings.

You can start by practicing the 15-minute Guided Meditation on Forgiveness: